TIM BURTON’S ALICE IN WONDERLAND
Richard Taylor once said to me (before he was officially Sir Richard, but fast on his way) that “About 30 percent of the work we do makes it to the screen”. He said so with great pride of workmanship, and he knew that the same could be said of many other departments on a given film.
One of the points he was making was just how massive a commitment of resources it takes to create a believable cinematic world; to quantify, in an accessible way, the incredible investment of talent and discipline necessary to find the kinds of specific solutions required to give the audience a satisfying experience. It isn’t about getting it all on screen, it’s about finding a comprehensive set of designs that are unified and that tell the story the Director wants to tell.
I mentioned this anecdote at Gallery Nucleus during the ‘Alice’ event they did, and Dylan Cole (who is not yet a knight but might be someday) agreed with the number, although he (also proudly, see what I’m saying about this pride of workmanship thing?) thought it was more like 20%.
So, with great pride (wink) here are two pieces from my 80% file. These Wrought Iron Horses, Pegasus’ and Unicorns came to mind one day while we were tasked with dreaming up the White Queen’s army.
The talented Kat Dias collaborated with me on the first one. Hey Kat! 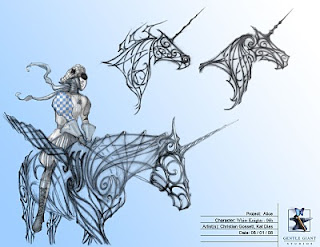 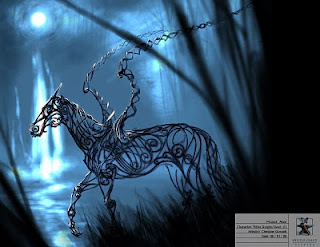 The happy ending here is that there is no ending. These concepts are being applied on another project as I write this. Bwahahahaha.
Christian Gossett